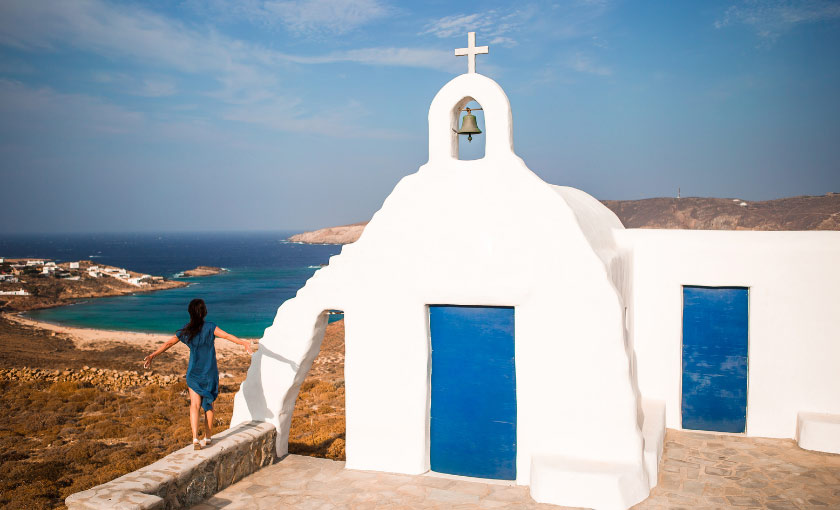 Besides an intense night scene and a strong cosmopolitan accent, Mykonos remains a traditional Greek island, the central aspect of its culture revolving around religion. In fact, the island is said to have more than 500 chapels and basilicas, which is challenging to imagine given its relatively small size. Of course, it’s impossible to see all of them in a single visit. However, some Mykonos churches stand out with their grace and unparalleled charm. 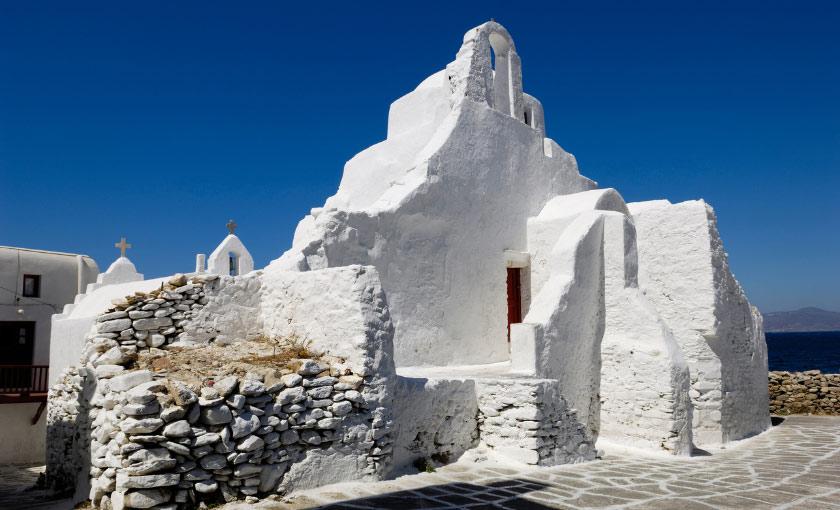 You will see Panagia Paraportiani church in almost every Mykonos postcard or photograph. Rightfully so. This chapel draws a lot of attention for its location (near the scenic Mykonos Little Venice neighbourhood) and its unique formation. If you look closer, you will find out that it is actually five different churches built one on top of the other!

The oldest one, Agios Anargyros church, dates back to the 14th century, while the other churches were constructed in the 16th and 17th century, with the dome-like Virgin Mary church built last. Some historians claim that Agios Anargyros is one of the oldest Mykonos churches.

Located in Mykonos Town, at the entrance of the Kastro region, Panagia Paraportiani has undergone several renovations until the early 1900s. As for its name, Paraportiani means “standing by the entrance door” and probably got its name for standing next to the door of the Castle. 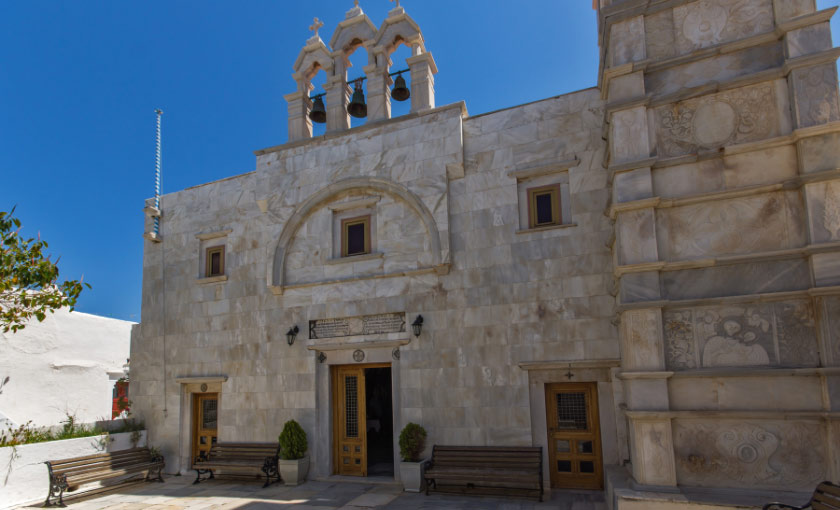 Adorning a spot at the idyllic village of Ano Mera, Panagia Tourliani is an awe-inspiring monastery dedicated to the Presentation of Virgin Mary founded in 1542 by two priests. Located around 8 km from the Chora, the monastery is home to an impressive ecclesiastical museum where you can lay eyes on rare holy vestments, Byzantine icons, and the first bells of the church, among others. 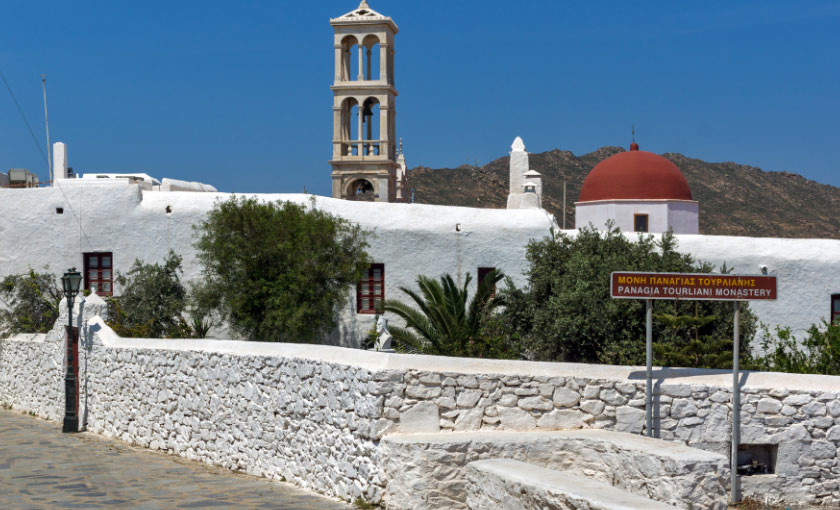 Restored in 1767, Panagia Tourliani has a unique icon of the Virgin Mary that was found in the Tourlos area. That’s potentially what christened the monastery. That aside, the monastery will make your heart stop with its lovely marble fountain, the 1775-handcrafted wooden altar screen, the silver dragons holding the hanging incense, and the scenes from the New Testament. If you are after Mykonos churches with matchless representations of the Holy Testament, then this is your place. 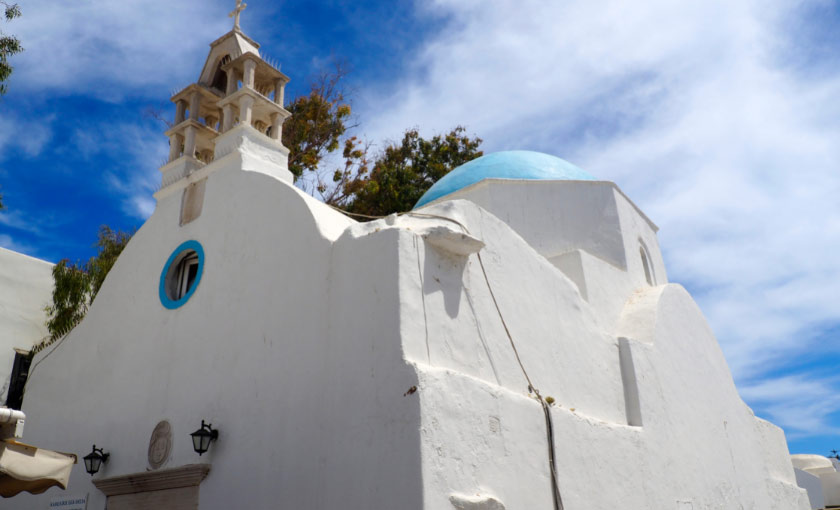 Yet another of Mykonos churches around the island capital (at Alefkandra square near the windmills) and the only one primarily serving the needs of tourists and local Catholics. It was built in 1677 but was burnt to the ground by a 1991 fire. This led to the partial destruction of the gracious icon of the Virgin Mary and baby Jesus hosted there (transferred from Venice in the early 1700s). However, it managed to regain its old glory a few years later, in 1997. That’s when the gold-plated arch you now see around the Virgin Mary icon was placed, and the church floor was covered with marble.

Visiting Paleokastro (meaning Old Castle) Monastery is definitely one of the top things to do in Mykonos. Located in Ano Mera, it occupies a hilltop spot overlooking the Aegean Sea. The 18th-century monastery can cut your breath with the profound natural beauties that surround it. Truth be told, Ano Mera is, indeed, one of the greenest areas in Mykonos. As for its architecture, it highlights traditional Cycladic elements that make it a feast for everybody’s eyes.

Concerning its name, the locals say it got it from being close to the remains of the old Gizi castle (aka Paleokastro). Finally, if you happen to see a huge granite rock rising some three metres above sea level, don’t be surprised. It is a strange prehistoric tomb and, admittedly, one of the strangest things one can find near Mykonos churches. 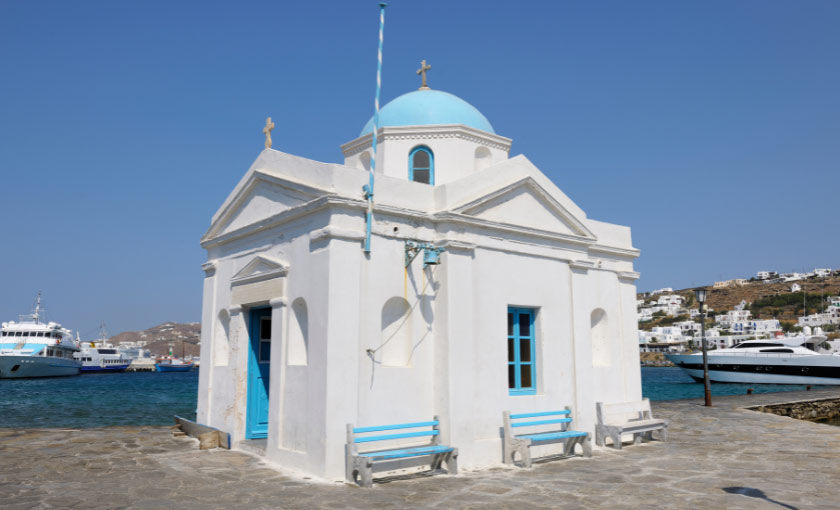 This is a small post-Byzantine Orthodox Church constructed in the 4th century to honor St. Nicholas that the Greeks regard as the protector of fishermen and sailors. Situated in the old port of Mykonos island Greece, it features a minimal interior with a handful of icons of the Apostles and Virgin Mary. Again, the church follows the lines of Mykonos architecture, with snow-white exteriors and a blue-dome roof blending harmoniously with the rest of the island’s constructions against a captivating backdrop.

Agios Nikolaos is also close to a delightful sugary shore (Agios Nikolaos beach) that gathers a lot of people (visitors and locals alike). Of the many places to stay in Mykonos, the Agios Nikolaos area is certainly a winner.

Another centrally-built post-Byzantine church and one of the most well-preserved basilicas in Mykonos constructed in honor of St. Helena and St. Constantine. The former Metropolis of Mykonos pampers with dashing views of the Aegean Sea, a gorgeous 9-metre bell tower, and many important icons of Archangel Michael, St. John the Baptist, and the Apostles. Today, it still holds to its past majesty, with its marble columns built with marble from Delos Island and a remarkable iconostasis.

Touring the most notorious Mykonos chapels 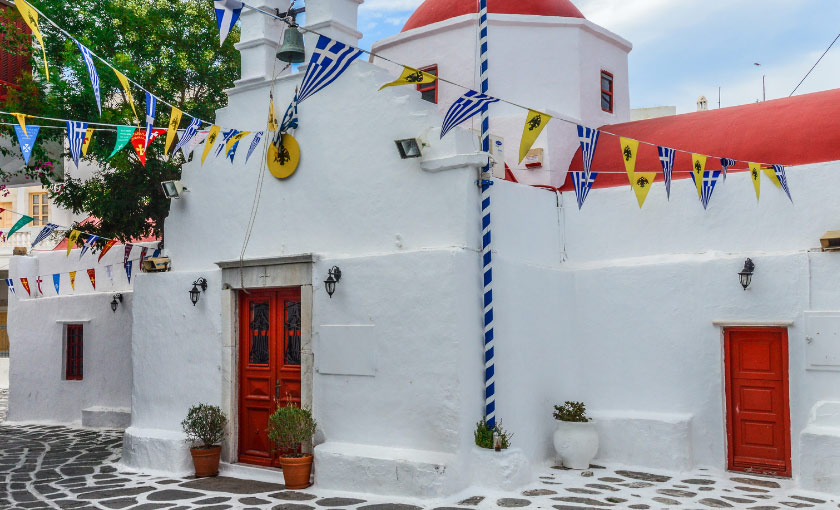 Those interested in polishing their holidays with a visit to the most prestigious Mykonos churches can opt for one of the many Mykonos tours. Depending on your needs, you can schedule a strictly church tour or combine it with other experiences, such as visits to sandy beaches.

At the moment, there are several different Mykonos excursions with stops to major local attractions, including churches and monasteries. If you have any doubt about which tour to choose, do not hesitate to ask us for assistance. 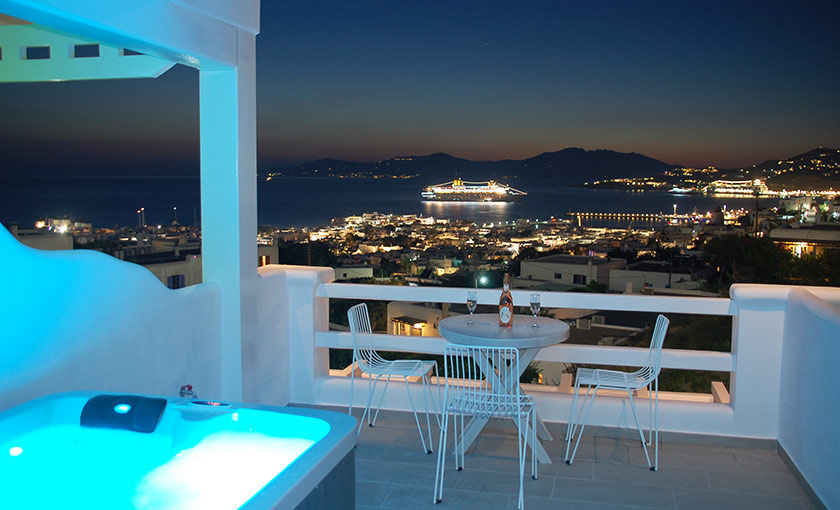 Being a global party mecca and one of the most popular Mediterranean destinations, Mykonos offers quite a lot of different Mykonos accommodation options, such as Constantina Zorz Xydakis rooms and suites that cater to the requirements of visitors seeking privacy, high-standard facilities, fantastic sea views, rooms with a private verandah, a huge array of amenities, and proximity to all the action, including the beaches of Ftelia and Paradise.

Actually, Constantina Zorz Xydakis is one of the few Mykonos town accommodation options rated 9.1 by couples, making it an ideal choice for two-person trips. We are also excited and humbled for being our guests’ favourite part of the island capital, according to independent reviews. Thank you!